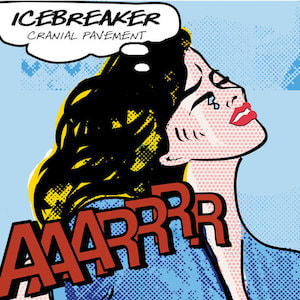 Buy from:
Ban on a Can
iTunes
Amazon
PayPal (CD Direct from Icebreaker)
Player-Piano Study #2b
Conlon Nancarrow (arranged by James Poke)

The little-known and extremely short Study #2b was unheard for decades until Nancarrow re-discovered it and included it on the Wergo set of recordings. Completely unconnected to Study #2, 2b was probably punched onto piano roll in about 1950 but has earlier origins: it is based on the last movement of the Piece for Chamber Orchestra no. 1, which had at that time not yet been performed. As such it is in fact the earliest material in any of the studies.

The study departs from the orchestral version by thinning out a lot of the material, which would be too complex for the single timbre of a piano, and also by adding a new ending. The study has never been written down in score form, so I have transcribed it from a computer version of the piano roll.

Gallows' Hill was commissioned by Bang On A Can, New York, with funds made available by the Arts Council of Ireland. It was completed in mid-September 2001.

The title refers to the place in Salem where the women who were found guilty of witchcraft were executed. The piece was born at the time when Concorde had just crashed and the News of the World had 'named and shamed' paedophiles. These paedophiles - who had already suffered the penalties for their crimes - were then punished all over again by the stupid and the hysterical, and, as these things inevitably go, several innocent men suffered too.

Mark two crosses on a piece of paper about one and a half to two inches apart (example below). Close your right eye and hold the piece of paper a couple of feet in front of you. Whilst looking at the right hand cross move the paper slowly towards yourself until the left hand cross disappears. You have now found your blind spot! Doing this with loved ones can be dangerous.


Blindspot was written in 1991 for Icebreaker and lasts about 16 minutes.

I. Chook - in which we meet all the chooks; Billy the Chook, Spot the Chook, Maureen & Doreen, Mrs. B, Brutus and Willy the Cock.

II. Mrs. B’s Love Triangle - in which Brutus and Willy the Cock vie for the amorous attention of Mrs. B.

IV. In Memoriam Brutus (the Thai curry) - in which Brutus serves a higher purpose.

The piece lasts about 23 minutes.