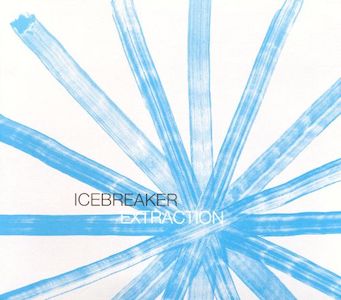 Buy from:
​PayPal (CD Direct from Icebreaker)
First, the title: Extraction comes courtesy of Leicestershire dentist Jeremy Whyman, who looks after the teeth of Icebreaker cellist Audrey Riley and who is into our music. Like most Icebreaker titles it doesn’t really have anything to do with the music.
​
This disc has its origins in the Wiener Musik Galerie’s Icebreaker Festival in Vienna, at the Museum of Applied Art in October 1999. The three-day festival featured Icebreaker and guests, and allowed us to mix some early pieces with new ones and to combine it all with mutli-media elements. As a former student in Vienna, I was very chuffed when Ingrid Karl and the Wiener Musik Galerie invited my band to the city. Then Franz Koglmann and btl suggested a live album from the concerts. Technical obstacles and the extremely resonant acoustic of the Museum’s beautiful exhibition hall made this very tricky, so we decided to record some music from the festival in the studio instead.

Mad Legs in a Sack (1990, revised 1999/2000) is by ex-Icebreaker founder-member Damian le Gassick. Each movement is an attempt to bump off members of the band – flute in the first (high solo in the most awkward key), sax in the second (how high can a sax go?) and of course both pianists in the third movement, with its big “Jazz Piano” solos (not to mention Pete’s frenetic bass part).

It was written for Icebreaker, the live band, back in the early days of touring small venues in Britain with our very crude portable PA, playing loud, using cheap digital pianos and sounding pretty harsh. This recording uses Steinways, but I have tried to recreate something of the feel of that rough and ready concert approach, direct but exciting.

The title comes about from Damian’s long term misapprehension that the phrase is an anagram of his name. It emerged that there was a letter missing, but the title stuck. Now that Damian is working as a successful pop producer in Los Angeles, I could point out that an alternative anagram of his name is “Dick Massage in LA”, but maybe I’d better not.

The title of The Baby Bear’s Bed (1999) by Gordon McPherson (commissioned for Icebreaker by my father, Greville Poke, and first played in Vienna), is also rather enigmatic. But it has specific relevance for Gordon: “According to the popular fairy-tale, after partaking of chairs and porridge, Goldilocks found the perfect bed. Although it suited her, the baby bear’s bed was, more importantly, not hers. A composer with my background sometimes feels this way about writing ‘classical’ music.”

​Mel is an English composer of electronic music, now living in Austria, and is a permanent fixture with Icebreaker as the whizzkid who makes sure everything on stage works. Mel’s ensemble, Merkin Zimmer also happened to be featured in the same Vienna concert.

It seemed therefore appropriate to ask Mel to do a remix for this album. Goldylox (spelling c/o McPherson) is a remix in the entirely conventional sense of the word, just not a pop remix. Of course it is supposed to be the “hidden track” so I’m not really supposed to tell you about it. Oh well, too late.