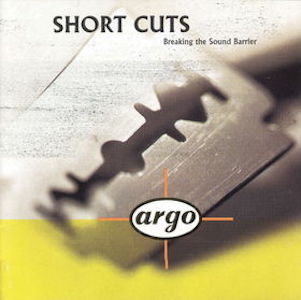 Excerpts from the works of contemporary composers featured on the Decca Argo label, including:

Other works featured are by Graham Fitkin, Michael Nyman, Henryk Gorecki and Mark Anthony-Turnage with performances by The London Sinfonietta, Piano Circus, the Balanescu Quartet, John Harle and the Michael Nyman Band.


​Argo 443 396-2
If any proof were needed of the vitality of contemporary music, this disc must surely provide it. Much of the music included here was first performed within the last five years, and all of it belies the notion that new classical composition can only be understood by a so-called intellectual élite. The composers represented on this disc have at least one aim in common; they all want ot touch the lives of the broadest public.

Music’s only renewable resource is the music written in its own time and the audience it attracts. Once we allow intellectual dogma to come between the music of our time and the audience it needs to survive, then we risk turning classical music into a museum culture, consigning the art of music to a historical ghetto. The present generation of composers are in the forefront of this development, it is appropriate that the Argo label should reflect the trend towards greater accessiblility.

Argo’s concentration on the music of Britain and America makes it particularly well placed to highlight this dynamic shift of attitude. The rich tapestries of these two countries’ musical lives have been woven out of the assimilation of many influences and styles from both ‘popular’ and ‘serious’ music. Their musical cultures have often followed quite independent paths from European models, and Argo’s own history shows a similar independence: this is a label which has brought challenging artistic directions to the attention of the listener, at the same time insisting on quality of performance and recording.

Within the broad framework of the Argo label, contemporary trends can be presented in context – and the existence of this context allows the label also to encompass composers who may not belong to the new generation, but whose ideals cross-fertilise with the new musical culture. Argo is not concerned with setting boundaries and creating pigeon-holes, but with making available the music of the most talented composers of our time.

Each composer on this disc is in his own individual way giving new music back to the listener, linking up with his heritage and moving music forward into the next century.