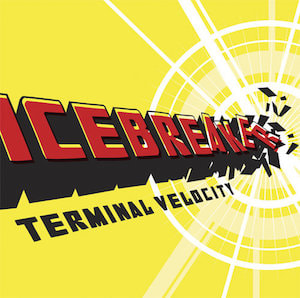 Buy from:
Bang on a Can
iTunes
Amazon
Since the formation of Icebreaker in 1989 critics have searched hard for a label to attach to the band and its music. Icebreaker’s frenetic energy, visceral but undanceable rhythms, searing virtuosity, confrontational, blasting volume and dynamic stage presence have all contributed to a musical image which cuts across established categories.

Initially, the musicians came together under James Poke and John Godfrey to play music by the ‘bad boy’ of Dutch music, Louis Andriessen, music widely performed and hugely influential in his native Holland but scarcely known at that time in Britain. Icebreaker’s sound evolved from Andriessen’s Hoketus, written for the ensemble of that name which he founded in the mid-1970s and scored for four keyboards and two each of panpipes, saxophones, congas, and bass guitars. What appealed about Andriessen was his sidestepping of both the scented-candle aura of American minimalism and the Angst-ridden confusion of much ‘serious’ contemporary music in favour of a hard-edged rhythmic idiom – uncompromisingly loud, heavy on winds, keyboards and percussion, and distinguished by a clarity of thought and expression. His work is represented on this recording by de Snelheid, originally written for symphony orchestra by arranged by Poke (with Andriessen’s enthusiastic approval) for the current Icebreaker line-up.

De Snelheid (which means ‘velocity’) sets out, the composer says, to explore how the idea of speed can be conveyed in musical terms. The relentless ticking of woodblocks throughout the work provides an accelerating pulse against which to measure the essentially unchanging speed of the musical material. Icebreaker’s problem was how to render the three large orchestral groups of the original with only fourteen musicians (although in this recording two extra percussionists have been added): in this respect amplification is crucial in recreating the immediacy and impact of Andriessen’s orchestral sound. Of the three groups it is the third (here alto flute, cello, bass guitar, keyboard and percussion) that eventually holds sway. Although providing the long-drawn-out melody at the beginning, it seems most of the time rather the underdog: its importance really lies beneath the surface, being, as Andriessen describes it, ‘the lungs which power the work’s breath.’

What began as an ensemble to perform an existing body of music, most of it Dutch, quickly developed a momentum of its own, together with a desire to refertilise the musical soil in which it had its roots. A sense of impatience to get on with something new can be felt in the pieces Icebreaker began to attract from ensemble members and from composers outside the band. This recording brings together (besides the Andriessen) four new works, all written for Icebreaker: Andriessen (b.1939) is joined by another established composer of the middle generation, this time from England, Gavin Bryars (b.1943); by the young New Yorkers Michael Gordon (b.1956) and David Lang (b.1957); and by ensemble member Damian le Gassick (b.1965).

For better or worse, there is something very English about Icebreaker. Not so much the familiar English virtues of restraint and understatement, but rather the manic humour of Monty Python: screwed-up, not terribly house-trained, at times rather loutish. As one reviewer put it, Icebreaker ‘don’t just – in the language of cocktail parties – break the ice; they smash up the furniture as well’. Titles such as Godfrey’s Euthanasia and Garden Implements or le Gassick’s Mad Legs in a Sack show an irreverent attitude to the posturings and decent etiquette of the contemporary music establishment, and are thoroughly irrelevant to the pieces themselves. And yet Icebreaker’s irreverence does not extend to the music they perform, as witnessed by the sheer intensity and relentless perfectionism of their rehearsal process. What has merged is a band with an aesthetic agenda as subtle as a sledgehammer, and a penchant for music that is irresponsibly loud, relentlessly hyper, fast, edgy, irritating, like an itch that won’t go away. The short but fiendish violin cadenza that ends Evol is an example: a gesture of exasperation, a final dissipation of the frustrations and accumulated tensions in the piece.

Icebreaker’s creative discomfort is provoked by their ambivalent attitude to just about every musical language around: the result is music that helps define a number of existing borders in the act of crossing them. Cutting through all the ambivalence is an insistence on rhythmic and harmonic material tensile enough to withstand the demands they make in selecting new repertory. Rhythm is the most immediate of their explicit concerns, and in particular rhythmic dissonance: irregular rhythms, sudden, precise tempo changes, simultaneous different meters in different instruments or instrumental groups. One of Icebreaker’s strengths is a virtuosity of ensemble rhythm, always achieved without a conductor. Evol, for instance, makes use of two basic rhythmic ideas, both of them apparently unnotatable, that le Gassick had come up against in a traditional jazz context. In attempting to pin down what it was that fascinated him about them he realised that both could be written down, albeit in a highly intricate way: the first rhythm is notated as five beats in the time of seven, and the second, rather tongue-in-cheek, in a time signature of 59/48 (a fraction shorter than a 5/4 bar). Bringing them off in performance, however, is more a question of feel than of metronomic precision. The whole point is not to square them out to the familiar jazz rhythms to which they approximate, since that would destroy the compelling, rather asthmatic rhetoric that

Much of Michael Gordon’s Yo Shakespeare uses three independent lines, each with their own quite different meter. The resulting rhythmic texture begs the question of where the ‘real’ pulse is to be found: it appears to flicker between the instrumental groups depending on where one focuses attention. In performance this creates the amusing situation of the musicians bopping in time with the music as they read it from the page but apparently out of time with the music itself. The result is a new kind of rhythmic exuberance close to rock music; a way of composing that comes from popular music but is not about it.

Regarding the title Gordon explains: ‘I have a friend from high school who can’t really get into my sort of music. When he calls me he greets me on the phone with, ‘Yo Shakespeare.’ I think he tags on the Shakespeare reference because Shakespeare is simply the only cultural figure that he is aware of at all. I think this maybe says something about American culture in general.’

By contrast, The Archangel Trip and Slow Movement take us into the realms of texture and harmony, pointing up underplayed strengths in Icebreaker’s approach. The gently modal feel and the rhythmic regularity of Gavin Bryars’s work offers something authentically in his own voice, rather than something that attempts to meet Icebreaker even half way: the piece stands, the composer says, rather like a gentle ballad in the middle of a jazz concert, something that sets Icebreaker’s other things in sharper relief. The title is a pun inspired by a film about two Russian icebreakers that ply the seas north of the former Soviet Union, cutting through the ice. Their home port is the northwestern town of Archangel, on the Dvina River. The two vessels cross from the Asian side to the European side in a rather fruitless way, meeting once in a while in an uncharted area. Bryars thought of the piece analogously as a musical journey: changes of texture stem less from the rather frozen instrumental colours than from harmonic change, which has the effect of providing punctuation rather than genuine direction.

David Lang remarks that one of the qualities that attracts him most in Icebreaker’s playing is its ‘edgy concentration.’ His piece Slow Movementstems from a wish to invent another sort of music for them to apply that edge to. He describes the piece as a musical object, dirty, messy, ominous: a giant invention, rather unsettling in the way it slowly draws the listener in. Lang admits it was rather ironic he should have produced a piece like Slow Movement in response to the invitation to write for Icebreaker. But as he says, what kind of music do you give to your friends? Sometimes you give them what they want; sometimes you give them what they didn’t know they wanted until you gave it. Icebreaker as a whole thrive on being given pieces that they didn’t know they wanted, music that stretches their musicianship and their instrumental skills even further. In the space of only five years they have established themselves as a permanent fixture on the international circuit, dedicated to encouraging new repertory and collaborating with composers on the realisation of new projects.