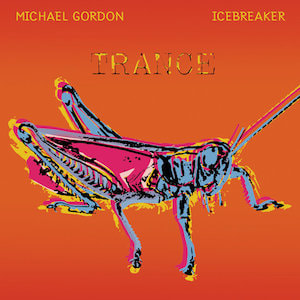 Buy from:
Bang on a Can
iTunes
Amazon
... the phone rings. the fax machine goes off. the radio is on. so is the tv, the computer is running and hooked up to the internet. I’m scanning music from all over the globe, great music and outlaw music, music by anyone that can set up a home page. the CD store is open 24 hours a day. at 3am I feel like listening to pygmy chanting from Africa, or Sufi dervishes from Turkey, or overtone singing from Mongolia. outside my window there’s noise. the subway runs over the Williamsburg Bridge, screeching metal against metal that I’ve begun to like. I hear the overtones and harmonies in the noise.

my friends play koto, bagpipes, banjo, zither, pan-pipes, harmonica, turntables … as well as violin and piano. the music they play is Irish, Indonesian, Indian, punk, Baroque, Peruvian, Polynesian. put it all together, mix it in a blender, bake it in the oven. out comes an upside-down cake. the cake tastes good. very good. I like cake.

in London Icebreaker is baking the same cake. pan-pipes, samplers, electric guitars, violin, accordion, saxes. forget what you know about music, period. its no longer crossover, fusion, world, new age, ambient … whatever new word corporate record companies come up with this week. what’s happening is beyond trendy transcriptions and hype. its actually a breakdown of musics, plural, and the emergence of new musics, also plural. out of the rot and decay of the musical traditions of various cultures comes new musical ideas built on the fact that the world is small, no place is remote, and information travels fast. a new idea in India is recorded and in the shop down the street before the end of the week. but who needs to wait?
in the midst of this cacophony of world noise the parameters of composing have changed. a composer picks their own heritage and destiny.

Trance started after a dream I had in July 1994 while I was in residence at the Djerassi Foundation just south of San Francisco. In the dream I brought my music to an older composer for his comments. The composer was a combination of György Ligeti, Louis Andriessen and my own teacher Martin Bresnick. This older composer looked through my scores, one by one, and I could hear in my head the music that he heard in his head as he looked at the scores. It all sounded like Mozart. After each score he shook his head in a discouraging way. Finally he turned to me and said, “You need to work with large forces.”
I woke up startled and the next morning I started work on Trance. I knew right away that the piece was for Icebreaker. I had been working with them for several years and they were everything that every other ensemble was not. The first time I met them they took me to a cottage outside of London where they rehearsed all day long for 4 straight days. At the end of each day, they would quit rehearsing, and after a group dinner, they would start playing tapes for each other and talking about music. This went on until 4 am.

Their rehearsal process allowed experimentation with rhythmic figures that were beyond the scope of rhythm as known in Western music. These rhythms were complicated yet could not be understood in any other way than as a groove or feel.
The openness and flexibility of Icebreaker allowed me to imagine music with a strong rhythmic pulse, written down, with no one playing the beat, and no one playing on the beat. The players in Icebreaker have trained themselves to play in independent interlocking units going on simultaneously – like all the different thoughts in one’s head that go on – like being able to hear all of the music that’s going on everywhere in the world, in your head, at the same time.
​
Michael Gordon